OSIS is the right solution for the retail business and its suppliers. Ultimately this business area especially is characterised by the intense use of EDI – be it in the exchange of order processes (orders and order confirmations), invoices, delivery advice notes or for the exchange of master data. Furthermore there is a wide range of other message types that can be exchanged with EDI partners via OSIS.

The EDI is generally carried out using EDIFACT messages (mainly ORDERS, INVOIC, DESADV), but also increasingly via XML files, for example for the communication with web applications.

In our view: Data security has the highest priority. For this reason the technical data transfers must be encrypted, the traceability must be transparent and the monitoring must be able to create relevant warning messages. The protocols X.400 and AS/2 are typically used. Additional to this are the web based communication methods – for example http(s) or SOAP – these are also increasingly being used. The signature of EDI messages can also be integrated via OSIS.

The retail businesses and suppliers have a multitude of challenges:

In order to meet these challenges OSIS can be implemented as your central EDI data management system. By the way: many retail companies and their suppliers also use OSIS for the EDI communication with their transport companies, warehouses, branches or web shops.

And while for small suppliers in particular the investment in a house internal EDI application often cannot be justified, the use of OSIS in an out-sourced scenario offers a practicable, cost-effective alternative. 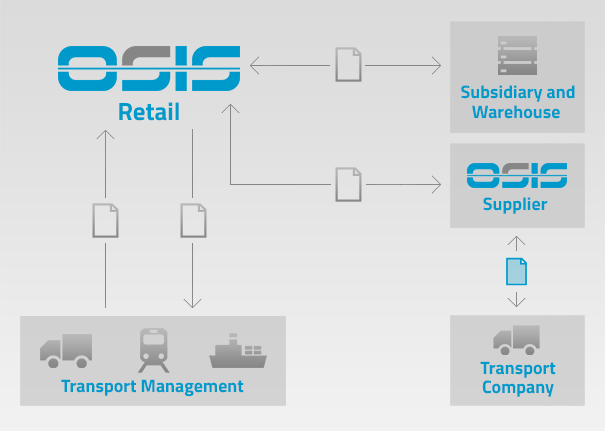