LS and LuraTech have together developed the first complete SAP e-Invoicing solution using the ZUGFeRD standard.

(Berlin) From now on a solution for SAP users to exchanging invoices electronically using the ZUGFeRD data model is available. This has been developed by the SAP certified company, the LS GmbH and the PDF/A experts, LuraTech Europe. In the first stage this solution covers the creation and sending of invoices as well as the processing of incoming invoices. Companies and public institutions can profit from lower costs and increased cash flows.

ZUGFeRD compatible invoices are  PDF/A-3 files that include the PDF file for visual control and archiving as well as the invoice in XML format for machine processing. The data model has been developed by the Forum elektroinsche Rechnungen (FeRD) which a large number of societies and companies have shares in. It is continually increasing in importance and is thus becoming more and more relevant for SAP users.

With the solution developed by the LS GmbH and LuraTech Europe GmbH SAP users can benefit from the standardised electronic exchange of invoices for incoming invoices as well as for outgoing invoices. The fast processing of the incoming invoice as an XML file as well as the time and costs saved sending the outgoing invoice both play a role in the benefits achieved. It has been proved in many studies that the costs of creating and sending invoices in the paper form are a factor greater than in the electronic form. Furthermore the supplier profits from the fast incoming payments and thus higher cash flow. Finally the creation of PDF/A-3 invoices is a gut service that with the increasing market presence of the ZUGFeRD data model is also often defined as a pre-requirement.
The creation of ZUGFeRD compatible invoices with the joint solution from the LS and LuraTech is possible with very little effort: The user generates the conventional PDF invoice from the SAP system and transfers it to the Open System Integration Server (OSIS) from the LS. At the same time OSIS receives the IDOC invoice via, for example the RFC (Remote Function Call) SAP interface and with this generates the XML data in the ZUGReRD format. OSIS passes this on to the LuraTech compressor with the PDF file which then converts the PDF invoice into a PDF/A file, integrates the ZUGFeRD XML file and creates the necessary meta information. The result is a ZUGFeRD compatible PDF/A-3 invoice that can also be sent using OSIS (via email) to the invoice recipient. 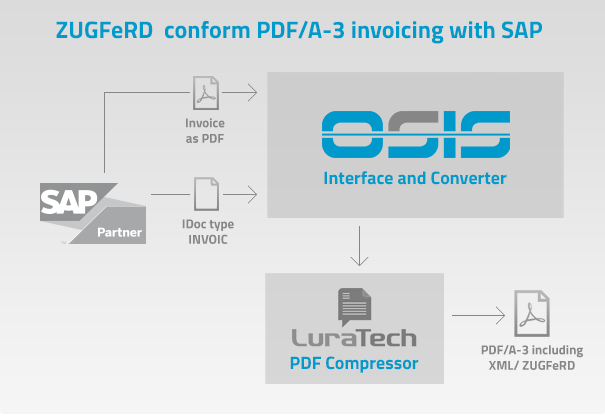 The application generates the conventional PDF invoice and pass it on to OSIS. Additionally an INVOIC IDoc is transferred to OSIS via the RFC interface where the message is converted into the ZUGFeRD XML format. These files are then passed on to the LuraTech PDF compressor which combines them to create a ZUGFeRD compatible PDF A-3-invoice.